Explanation on the breed standard of the Akita

The shape of each part of the head contributes greatly to an expression of majesty, dignity and an esthetical simplicity, etc., while the position and balance of the head are a vital part of the total picture as well. 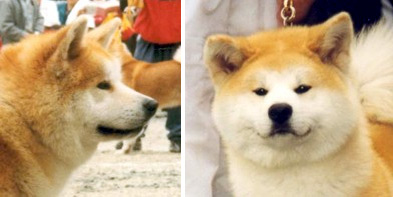 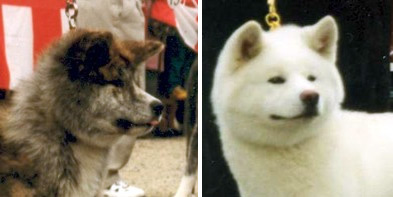 The Akitas ears are shaped like a scalene triangle (a triangle with unequal sides) with slightly rounded tips. If the set of the ears is too high, the distance between the ears would be too narrow. If the set is too low the tendency is toward so called Kanzashi Mimi *1 (ornamental hair pin ears). These are ears whose openings face toward the side rather than the front and may be carried outward (airplane ears). The correct ear is one where a perpendicular line from the tip of the ear passes through the midpoint of the base of the triangle. The shape and expression of the eyes is an indication of the clog’s temperament and has a decided influence over the total look of dignity and majesty. The shape of the eye is one of a scalene triangle which is longer horizontally. The inner corner is deep and the line of the lower lid extends upwards with the outer corner directly below the ear. If the distance between the ears is too small, it gives the Akita a very severe, close eyed and nervous expression. If the eyes are set too wide, the expression lacks alertness and intelligence. The eyes must be dark in colour. Light eyes in an Akita lack dignity.

In the side view, the lines and angles of the head are quite important. The angle of the ear is acute relative to a horizontal line. The ideal angle is roughly parallel to the angle of the neck. If the angle is too wide, meaning the ears are too upright, the expression lacks concentration. On the other hand, if the angle is too acute the expression is one of dullness and lack of spirit. The line along the nasal bridge should be almost parallel to the skull. The angle of the stop needs to be moderate. The depth of the stop along with the construction of the forehead is a critical element of the Akitas head to be observed. There should be a shallow hut distinct furrow running between the eyes toward the back skull with no wrinkling of the forehead. If the lips extend back too far, the clog lacks the dignity as well as one of the important characteristics of Japanese dogs.

The official standard describes it as "powerful and of medium length; the base is thick and the tip is not pointed; lips tight. “ The upper lips should be tight and strong without drooping or loose flews. If the tipper lips are even slightly loose, the muzzle cannot be of the proper shape. The shape of the muzzle can be roughly described as one of three types: circular, rectangular and triangular. The triangular muzzle lacks fullness. The bridge of the nose is narrow and gives the impression that something is lacking. The tipper lips are also somewhat loose.

The ideal muzzle is circular in shape, imparting to the face the classic fullness and desired expression without any looseness or droopiness of its features. 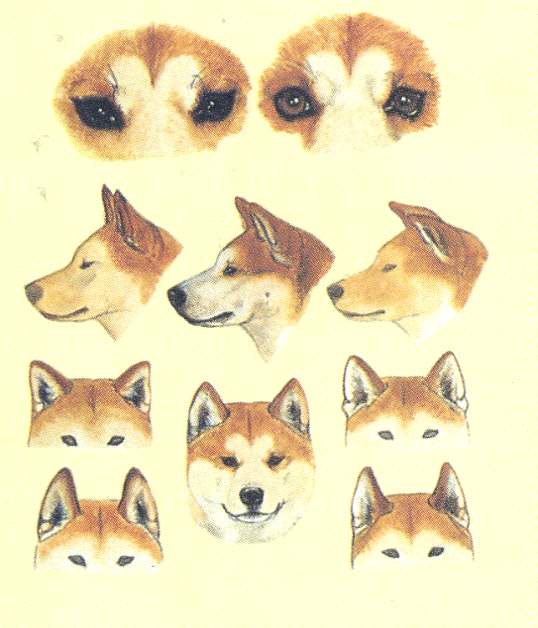 Mid images:
Ears to steep - Ears correct - Ears to inclined to the front